Guitarist and singer James Hetfield, born on August 3, 1963, in Downey, California, formed the heavy metal group Metallica with drummer Lars Ulrich. The band with underground roots became a multi-platinum act known for albums like Ride the Lightning, Metallica, Load and St. Anger as well as singles like "Fuel" and "Turn the Page." By 2013, Hetfield and the band had won eight Grammy Awards.

James Hetfield is at the pinnacle of the Heavy Metal world. At this level, a band must deliver the goods consistently and reliably, which is why whether in rehearsal or stadium, Metallica has always used Peterson tuners. 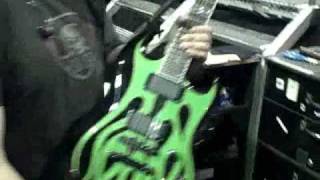