Francesco is a self-taught bass player and singer. He started playing music in 1990 when he was 11 years old. At that time, his school offered two different classes: classic guitar and Karate. Obviously, he voted for Karate but his parents said NO! He was one of the worst guitar players in the Solar System but with a good sense of rhythm. After a few months he founded his first band.

One day, in 1993, he went to the music shop to get his first electric guitar but when he was about to pay...he heard a powerful, round and warm sound coming from another room. It was a BASS! So, he put the guitar back in its place and bought a super cheap bass. That's how the story began. It was time for a bassist to born. He has always been in love with the percussion world as well, so he mixed his knowledge in drumming and string playing in order to create his personal and peculiar Bass Style.

During the years, Francesco, has been running through several and amazing experiences all over the world (studio/stage). Winter Olimpic games and NAMM SHOW are just some of the stages he walked on. He also opened for big names as well as Papa Roach, Sepultura, Soulfly, Dave Lombardo (SLAYER) & The Philm, Destrage. The GrooVster is the bassist, singer, founder, author and composer of THE MATCH, a unique Bass & Drums Funk/Metal/Alternative duo, always on the road, all year long. Their first Official Album (JUST BURN) is available on the most known digital stores. Check out his 1-Man-Band project too!

Francesco "The GrooVster" Gallo is endorsed by some of the main brands on the market...and Peterson is one of them!

5 String Bass
I Play This 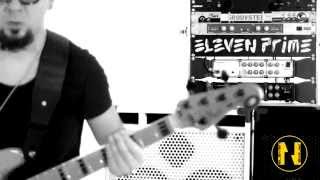