From the back-room of a music store in Gainsville, Florida, teaching guitar to, among others, a teenaged Tom Petty to superstardom as a member of the Eagles, Don Felder aided the transition from country-tinged acoustic ballads to the electrifying iconic sound of the Eagles in the mid 1970s to their breakup in the early 1980s. Together with Joe Walsh, he was the man behind the memorable guitar licks strewn all over "Hotel California" which defined an entire era in the late 1970s.

Both in those days, and later at the beginning of the 1990s during the comeback, Eagles concerts were massive occasions, soaring vocal harmonies matched with a three guitar assault on the senses meant some serious tuning work, the Peterson and Conn names were constant sights both in the studio and on the stage. No surprise then that Mr. Felder continues to use Peterson strobe tuners. 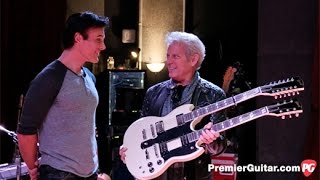