Updateable, sweeteners, customizations, accuracy way higher than other options. So tight you can tell how old your strings are. Great tuner. 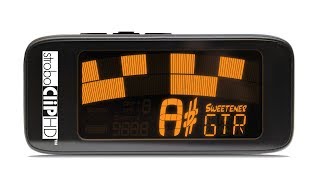 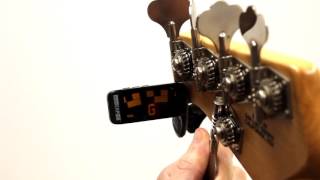 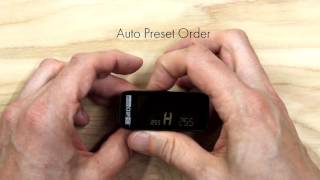 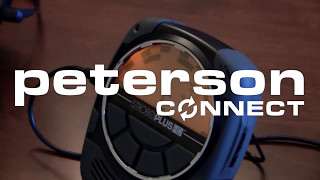 The Peterson StroboClip HD™ (SC-HD) has the same tenth-of-a-cent accuracy as all Peterson Strobe Tuners. This versatile tuner comes complete with a bright high-definition screen, over 50 Sweetened™ tunings, alternate temperaments for a vast array of string and wind instruments, and soft rubber-lined jaws to protect your instrument's finish while offering a firm grip for maximum signal tracking.

The jaw of the StroboClip HD is greater than 1" (25.4mm) to accommodate a variety of instruments and mounting locations.

Early music and orchestral instruments can be tuned with ease.

EASY TO USE IN THE DARK

Our improved design raises the power button for instant identification on a dark stage and the positive-click, tactile buttons take the guesswork out of changing settings on the fly.

Confidently perform touch-up tuning quickly between songs and save valuable seconds during the gig.

With rock-solid tracking down to 16Hz, tuning that low B will never be a problem.

There is no more need for 12th fret tuning to get low notes to register or trying to decipher an erratic tuning display.

The StroboClip HD will always deliver a smooth tuning response and convey even the most minute changes in pitch in real-time allowing users to get in tune faster using the highest resolution in tuning accuracy.

Compare to Sweetened Tunings offered in other products.

Reviewed on
Peterson Website
Plays 5 String Bass, 4 String Bass
Product an customer service is excellent. Thank you.
Was this review helpul to you?
Log in to reply

Reviewed on
Peterson Website
Plays 6-String Electric Guitar, 6-String Acoustic Guitar
Certainly not the cheapest solution. I've never used a clip-on or strobe tuner. I've been using a Korg GT-12 and a LockOn Autotuner both of which were also not cheap. For years I was happy with the results from both tuners. They both agreed with each other and my guitar always sounded good. The first thing I did when I got the Stroboclip was tune using my old tuners and then used the new strobe. Two strings didn't need much correction but four strings were off. When I corrected them I couldn't believe the difference in sound. In order to make sure I wasn't just "willing" the more expensive tuner to sound better I had my wife sitting there when I did this. She has very acute hearing and said the difference was amazing. So the proof is, does it work better than other tuners? Yes. Is it worth the extra money? Along with the feature rich software and ability to upgrade the firmware (something I didn't expect), definitely Yes. Now let's make sure it keeps working that way.
1 person found this review helpful.
Was this review helpul to you?
Log in to reply

StroboClip HD
Almost perfect
By Dave Weisbord on Wednesday, September 1, 2021
Reviewed on
Peterson Website
Plays 6-String Electric Guitar, 6-String Acoustic Guitar
The best tuner I have ever owned - not just the best clip on. Accurate and consistent, bright display and display moves and rotates in many directions. Why only 4 stars? I have the istrobosoft for my iPhone and one feature it has that I miss here is it shows how many cents you are off sharp or flat. I kinda miss that feature.
1 person found this review helpful.
Was this review helpul to you?
Log in to reply

StroboClip HD
Great Customer Service!
By Thomas Steinel on Friday, August 13, 2021
Reviewed on
Peterson Website
Plays 5 String Bass, 6-String Electric Guitar, 4 String Bass
I lost the screw and nut for my Stroboclip HD. When contacting Peterson's support and asking for the dimension for the lost items, they offered to send them to me.

So now my tuner is back in service. One important fact to mentions is that I live in Germany. Believe you me, it is not easy so get any service from a company outside of Europe, so thumbs up for Peterson.

StroboClip HD
Confusing to use since flat and sharp directions are not easy to understand.
By Ynnon Rother on Friday, August 6, 2021

Reviewed on
Peterson Website
I bought two of these stroboclips because they were on sale, replacing an aging snark.
I use them on my 4 and 5 string, fretted and fretless bass guitars.
I find the tuning display un-intuitive and confusing. I usually tune the wrong way when there strange river of shapes is moving, so I often waste time. I've tried setting the intonation on my basses with it, but again, having to think which way is flat and which is sharp.
It would've been better to have some sign showing flat or sharp, as well as a cue that shows when the string is actually in tune.
Lucky for me I paid $25 a pop for these, had I paid full price I would have certainly returned the tuners, since the UI isn't doing it for me.
The tuner itself is robust, the display is bright, and it tracks low B strings well, the display choices by Peterson really ruin it for me, and often perplex fellow bandmates when they need to quickly borrow the tuner.
Was this review helpul to you?
Log in to reply
( 1 )

Reviewed on
Peterson Website
I own a few of these. I will never use another tuner. Why? Because not only are Peterson tuners the most accurate consumer-level tuners you can buy, but you won't find better customer service than Peterson. They stand behind every product they make, and if anything one wrong with it, they will take care of you.
1 person found this review helpful.
Was this review helpul to you?
Log in to reply

I opened an online support query, and the advisor was exemplary in his assistance. I am awaiting receipt of a replacement cover gratis
Was this review helpul to you?
Log in to reply

How do I read a strobe display?

Adjust your instrument until the pattern is as close to still as possible. Strobe displays are 'real-time' and extremely high definition. They require very precise tuning adjustments to stop the display because the frequency/pitch of any instrument is never totally stable.

You'll quickly learn to read the display, make the most precise adjustments and appreciate the high resolution that only a Peterson provides.

Peterson Connect does not detect my StroboClip HD in Linux environment.

Chrome needs access to /dev/hidraw*, so either set "chmod a+rw /dev/hidraw*" or start chrome as root with the --no-sandbox option

*Some Ubuntu based distros do not allow running Chrome as root with the --no-sandbox option enabled. -Running as root without --no-sandbox is not supported. See https://crbug.com/638180. You can however run Chromium as a normal user and invoke that option.

* Some Peterson products operate in two different modes with individual product id's for firmware update operations. Multiple rules may need to be created. Here is the list of Peterson USB product ID's

Is the accuracy the same for all Peterson tuners?

Yes, the accuracy is within 0.1 cents (1/1000 of one semitone) as with all Peterson Strobe Tuners. An important thing to note is that Peterson Strobe Tuners have ultra high definition displays, so not only are they highly accurate in detecting a note but they have the ability to display that accuracy. Other products claim accuracy but do not have the high definition screen to display the level of accuracy in which they claim. If you cannot see the accuracy, it is of little value. Only Peterson provides High Definition Strobe Tuning.

What is my StroboClip HD’s Sweetened Tunings feature all about?

A Sweetener is a set of cent offsets or a deviation from generic Equal Temperament interval spacing traditionally used in tuning. Tuners made by Peterson, including the StroboClip HD, contain many choices of “Sweetness“, in other words, several presets with differing interval spacing relevant to the instrument being tuned. If you’ve never been happy with how your instrument tunes up with your present tuner, a Sweetener could be just the thing to change that without any modifications whatsoever. The StroboClip HD offers 50 unique and very accurate “tweaks” which often make all the difference, try it!

Does my tuner require calibration?

Generally, your tuner will not require calibration and should remain perfectly accurate if it has not been damaged.

Unlike more modern Peterson strobes, legacy models such as the Peterson 400, 420, 450 and 700 do require occasional calibration.

If you require service, please open a support ticket and return the tuner for repair.

There are no entries matching your search.

Not finding an answer? Open a support ticket for personalized support of your Peterson product.

Not finding an answer? Open a support ticket for personalized support of your Peterson product. Protect your StroboClip HD while traveling to and from your gigs! This semi-rigid, custom EVA molded case is soft but durable and features a zippered flap top, pouch for additional accessories, and an embossed Peterson logo. Size: 9cm x 6cm x 4cm. (This case is NOT compatible with the original StroboClip model.)
MORE Help and support for all Peterson products.