Russell Moore and IIIrd Tyme Out

Russell Moore and IIIrd Tyme Out

“Playing music is the easy part,” says Russell Moore with an ever-so-slightly rueful laugh as he looks back on more than thirty years of doing what he grew up wanting to do. “By the time we put this band together”—he’s talking about IIIrd Tyme Out, his musical vehicle for over twenty-five years now—“I was realistic enough to know that bands come and go. Being able to stay together is the hurdle that everyone faces. So I didn’t have a preconceived notion that someday I’d be celebrating twenty-five years with IIIrd Tyme Out—but I did feel like I would be playing music for the rest of my life.”

As it turns out, while many bands have come and gone since that May in 1991, Russell Moore & IIIrd Tyme Out have endured. In the process, they’ve managed to climb to the top not just once, but twice—winning a slew of IBMA vocal awards, including two Male Vocalist of the Year honors, in the mid and late 1990s, then persevering through rough times to see Moore recapturing the Male Vocalist trophy for the three more years. Along the way, they’ve made a whole new generation of fans, and with the release of Timeless Hits From The Past… BLUEGRASSED by Cracker Barrel Old Country Store and their latest self-produced album, It’s About Time, the quintet are poised to deliver their distinctive kind of music more widely than ever.

For Moore, it’s been a long journey from his childhood Texas home. Raised in Pasadena, near Houston, he heard a lot of country music growing up—“I was five miles from Gilley’s right during the Urban Cowboy craze,” he notes—but it was bluegrass that really turned his head as he moved into his teen years. “Bluegrass was accessible,” he recalls. “The bands, the musicians, they were so approachable—and even though we weren’t in the bluegrass mainstream geographically, I was able to see artists like Bill Monroe, Larry Sparks ands the Lewis Family, and you could just be around them. That was intriguing to me.”

Within a few years, Russell was playing mandolin in a regional band, and by the time he was in his early 20s, he had teamed up with a couple of like-minded youngsters to create Southern Connection, making the move to North Carolina to pursue bluegrass success—though it turned out that when he first found it, it was as a guitar-playing sideman. Joining Bluegrass Hall of Famer Doyle Lawson and his legendary band, Quicksilver, Moore quickly found himself in the bluegrass forefront, remaining there with Lawson through six years and as many bluegrass and bluegrass gospel albums. And though his tenure with Quicksilver barely overlapped the establishment of the IBMA’s awards, Moore shared in the first of many to come when the group took home the Song Of The Year crystal in 1990 for “The Little Mountain Church House.”

Still, a desire to make his own mark impelled Russell, along with bandmates Mike Hartgrove and Ray Deaton, to take the bold step of creating their own group in 1991. Naming themselves IIIrd Tyme Out—a reference to the number of professional bands they’d already been in, complete with a memorable twist on spelling—the group hit the ground running, releasing three well- received albums on the venerable Rebel Records label in just four years. “We weren’t immune from the same things that any other band starting up has to endure,” Moore recalls. “You have to prove yourself—you have to let people know that you’re sincere, and that you’re going to work hard. But once we were able to get enough show dates that we didn’t have to have day jobs, we felt pretty good that as long as we continued to work hard, put the music out that we knew we were capable of, be personable and humble and appreciative—we felt that we could continue on if we chose to.”

And continue on they did. In 1994, they earned the first of an unsurpassed seven consecutive IBMA awards for Vocal Group of the Year, along with Russell’s first Male Vocalist of the Year title. For the remainder of the decade and into the new century, IIIrd Tyme Out was among the most important acts in the field, earning acclaim for the compelling artistry—especially vocal—they brought both to a string of well-received albums and to stages across the United States. Yet all was not well within the group, and in the early part of the new century, partnership tensions and personnel instability came to a head—and with them, the very real possibility of an end to the group.

It was at that point that Russell Moore stepped up. “I was stubborn,” he says with a smile. “I knew there was a lot that could be done with this group, and I was stubborn enough to say, I have put too much into this to let it just get away. So when everything came down to it, I knew that it was time. I could have started something brand new, but I would have had to give up everything that we had worked for. So I decided to stick it out. I kept hoping that everyone would start pulling in the same direction—and I kept praying, too.”

With Moore in charge—and with his name now in front, recognizing both his new leadership role and the group’s single biggest musical focus—IIIrd Tyme Out began to rebuild. Signing with Rural Rhythm Records in 2007, the quintet solidified a new lineup, and the 2009 release of Russell Moore & IIIrd Tyme Out, with its hit single, “Hard Rock Mountain Prison,” paved the way for Moore to take another Male Vocalist honor in 2010. Prime Tyme and its irresistibly catchy “Pretty Little Girl From Galax” followed in 2011, as did another Male Vocalist trophy, and Moore was called to the stage yet again at 2012’s IBMA awards to accept still further recognition of his preeminence as a singer.

Yet IIIrd Tyme Out is hardly a one-man show, even with a frontman as spectacular as Moore. Wayne Benson, who joined the band over 20 years ago—just in time for the aptly titled Grandpa’s Mandolin—and stayed for nearly a decade before taking a job with the John Cowan Band, returned in 2007; his tasteful, influential approach to the mandolin is a focal point of the group’s instrumental prowess even as he continues to contribute in the vocal department. Behind him comes fiddler Justen Haynes; a member for over a decade, he’s a second- generation bluegrasser who’s earned the admiration of peers and fans alike for his supple melodic lines and tasteful vocal support.

Joining the veterans are two new members who, Moore says, have fit quickly and easily into IIIrd Tyme Out’s signature sound. Keith McKinnon, who served memorable stints with his brother Kevin in singer Carrie Hassler’s band and in their own Still-House, takes over the banjo slot and Jerry Cole, a six-year member of Pine Mountain Railroad, and a self-proclaimed Russell Moore fan, is the new bass player. Both men will also contribute to the group’s award-winning harmonies. “As a band,” Russell notes, “it’s sometimes important to reinvent yourselves, your music and your show, to keep things exciting and fans engaged. Quite often a band member change can be the spark that lights that creative fire. I know the feel and excitement of being a new member of an established band, dating back to my days when I joined Doyle Lawson & Quicksilver, and it’s great to see and feel that same excitement from Keith and Jerry.”

The quintet’s Cracker Barrel Old Country Store release, Timeless Hits From The Past…BLUEGRASSED, made Billboard’s Top 5 Best-Selling Bluegrass Albums of 2013. The success of that album, released separately from an established bluegrass record label, gave Moore the idea to release the band’s next album on his own. So he started Break A String Records and released their latest album, It’s About Tyme in September 2015. Recorded at Zac Brown’s Southern Ground Studio in Nashville, TN, the album has been a record-breaking, career milestone for Moore and IIIrd Tyme Out. To date, it’s produced three #1 Hits; “Brown County Red,” “CottonTown,” and the Moore original, “I’m Leaving You And Fort Worth Too.” And the album debuted at #2 on the National Bluegrass Survey’s Top 15 Albums chart in November 2015 then climbed to #1 in December 2015 where it lived for SIX consecutive months – a first for the band. The success of It’s About Tyme has resulted in a 2016 IBMA Nomination for Album of the Year.

Add it all up, and the future is looking very bright for Russell Moore & IIIrd Tyme Out. Indeed, if one measure of success is the degree to which younger and newer musicians look to a group for inspiration, then IIIrd Tyme Out is about as successful as a bluegrass group can be, for a whole generation of young pickers and singers can be heard across the country trying their hand at IIIrd Tyme Out classics. “It’s one of the greatest compliments you could ever have,” Moore acknowledges. “It’s humbling to know that they think that much of what we’re doing—and sometimes it makes you think wow, we really are making a difference. People are taking notice.

“All the awards, all the recognition, those things are just by-products of doing what we love to do —and of having everybody pulling in the same direction. So to get them is a little overwhelming, sometimes. But when you know that somebody else out there is getting something from you because of your music, well, that’s the thing about music that got me into it—just the love of the music, and the way it made me feel. It always has been therapeutic, and it still is—and you can’t ask for more than that.” 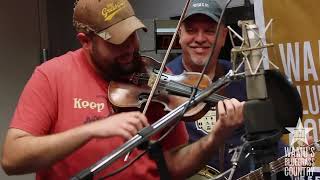 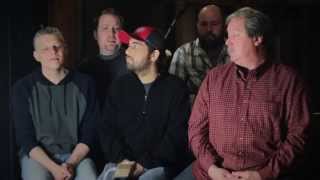