The Band Perry's "modern throwback" style combines classic Country with an eclectic infusion of Rock, Gospel and Soul. As songwriters and musicians, their sound is rounded out by perfect three-part harmonies. The self-titled debut album, THE BAND PERRY, was released in October 2010 by Republic Nashville and one year later was certified Platinum.

The Band Perry currently counts a CMA nomination for “Vocal Group of the Year” for the awards which will broadcast on ABC on Thursday November 1st, 2012. Earlier this year the band garnered a Grammy “Best New Artist” nomination and a 2012 ACM “Vocal Group of the Year” nomination among their list of honors. They are the 2011 ACM “New Artist of the Year” as well as the reigning CMA “New Artist of the Year.” They earned the 2011 CMA Award for “Single of the Year” while Kimberly Perry was honored with the 2011 CMA “Song of the Year” award. Other honors include the 2011 CMT Music Award for “Breakthrough Video of the Year,” the "Best New Live Act" Award and another CMT nomination for “Group Video of the Year” as well as TEEN CHOICE, AMA, and ACA award nominations. The Band Perry was also among the nominees for the 2012 Teen Choice Awards for “Choice Country Group.” Since celebrating a two-week #1 with their Gold-certified single, “All Your Life,” and a Platinum debut album earlier this year, the excitement continues for The Band Perry. The RIAA has certified their #1 smash, “If I Die Young” Quadruple Platinum, for sales exceeding 4 million. The breakout hit is the only single from a debut album in the last 18 months to achieve this status and has sold more copies than any other Country artist in the same timeframe. The band’s single “You Lie” has also been certified GOLD and their most recent single “Postcard From Paris” is a Top 10 hit. Currently, The Band Perry is performing their own headlining dates and touring as special guests on Brad Paisley's "VIRTUAL REALITY WORLD TOUR 2012." They are also writing and recording their sophomore album, due out later this year.

When talking about The Band Perry, each member of the trio stresses how much family figures into the mix: "Reid, Neil and I share genes and a musical pedigree," Kimberly explains. "We read the same classics and cook from the same recipes. With all of our likenesses though, I believe it's our distinctions that stir up the magic when we create. When the three of us sit down to write songs together, we pull from all of our individual perspectives and happenstances to create the most interesting song concoctions." "There's a tightness between the three of us that goes way beyond even best friends,"Neil adds. "Family vocal harmonies can't be fabricated. And, besides - the three of us know that through the thick and thin of life and the music business, we're watching after each other." "Blood runs thick. The music business can be hard, but the three of us are committed not only to our lives in music, but to living them together," Reid says. "I think the security of knowing that about each other allows us to be uninhibited when we create. It's a democracy. It's a safe haven." "We've walked a long way to find your ears," Kimberly Perry finishes with a grin. "So play us long and play us loud. The Band Perry is here, and we just have so darn much to say." 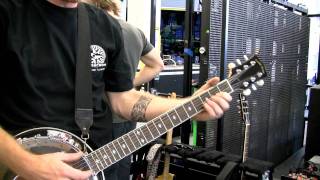 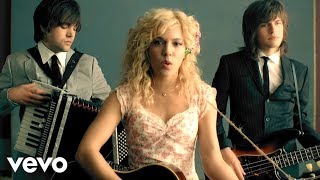 The Band Perry - If I Die Young